You are here: Home / About / Our History

In 1946, Don started his training career, along with working with people and their dogs. In 1952, he entered military service, serving in the K-9 Corps. His responsibilities included training sentry and scout dogs, along with managing the dog kennels in the Far East during the Korean Conflict. He served on the Army Dog Training Center’s demonstration team, working and training silent scout dogs, sentry dogs, messenger dogs, and casualty dogs. Don also trained U.S. Army personnel for scout and sentry work in Korea, serving in Korea with the 39th Infantry Scout Dog Platoon. He was NCO in charge of the Far East Sentry Dog Training Center in Japan.

Don was one of 12 kennel operators from across the country to serve on the original Board of Directors of the American Boarding Kennels Association (ABKA), established in 1977, which eventually became the Pet Care Services Association (PCSA). Don served as regional director for seven years, treasurer, chairman of the ethics committee, and was a member of the oral examining board for the certification of kennel operators. Diana also served as regional director for three years.

Don became a Certified Kennel Operator in 1979, after being in the boarding kennel industry for 19 years. PCSA awards the prestigious CKO designation. To qualify for CKO certification, an individual must complete a two-year educational program, must exemplify high ethical standards as outlined by the PCSA ethics committee, and must demonstrate a high degree of competence in animal care and kennel management through a combination of written examinations and oral interviews. Don and Daryl Gutknecht are the only CKOs in the Milwaukee area.

Don and Diana remained active members of the PCSA, for whom they served on various committees and continued to participate on panel discussions and as meeting planner/coordinators. Since they are considered “veterans” in the industry, they also help other kennel operators who call upon them for advice. They also regularly attended conventions, workshops, and seminars, which are offered to keep pet care professionals current in all aspects of pet care services and business management.

In 1999, Diana retired from the day to day operations and their son Daryl joined his father full time in the day to day operations. In 2015, Don had decided he was getting to point of slowing down. So, the decision to sell Animal Motel to his son Daryl and his partner Michael was made and was finalized in April of 2016 however, Don still remained a member of the Animal Motel team as the Director of Training until his passing in October of 2019. Since 2016, Daryl and Michael have been working on updating the current facility. Some of the improvements that have been made include bringing in digital technology, remodeling of the lobby and training hall, starting individual and group day care, equipment updates and upgrades throughout the facility and landscape work. We continue daily to better ourselves and our facility. We are members of IBPSA – International Boarding and Pet Services Association and are working on having each member of our team fully certified by IBPSA and PACCC – Professional Animal Care Certification Council. 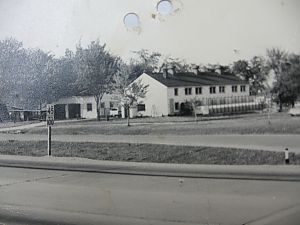 A Message from Daryl:

The Gutknecht family thanks you for visiting our site. We hope you found it interesting, informative, and have gotten to know us better. We would also like to thank our past and present employees for their hard work and dedication to the welfare of the animals we care for. Without their commitment and love for animals, we could not maintain our high standard of care.

On a personal note, I would like to thank my family for all of their support in making Animal Motel a success and allowing me to carry on the tradition of caring for precious pets. I would especially like to thank my Dad for turning his love for dogs and their training into a life long career and to thank my Mom, who lovingly supported him because without them Animal Motel would have never existed.

Animal Motel is not only the result of my parents combined efforts, hard work, and commitment to excellence in pet care but also my siblings’ efforts as well. My sister Dawn was a groomer for Animal Motel for 40 years before retiring. Although my two brothers, Dale and Dell, were not actively involved in the business, they have been generous with their help and support when needed.

As for myself, I grew up in this business and have dedicated my life to the care of pets and I’m very honored to be the second-generation owner of Animal Motel along with my partner Michael.

We hope you enjoyed your visit to our site. If you’ve never been to our facility, stop by for a visit. Our team and family look forward to personally meeting you and your pet and being of service to you, our guests.

Thank you for allowing us to take care of your precious pet.